I had read about different tour companies doing treks around Chiang Mai but most of them incorporated elephant riding, and I didn’t want to do that. So I just picked one in the hotel brochure that was only walking. There wasn’t that much information about the trek at all. Just how long it would take and generally what we were visiting. But no explanation to prepare you. Only: “This is a trek for whom that loves nature and walking”. I kind of read between the lines there and thought that it was just right for me with a bit of serious walking and some nice scenery. And I actually had no idea what company was doing the tour.

They picked me up at my hotel in a classic Chiang Mai taxi, kind of like a pickup truck with roof. They picked up the rest of the people and off we went. We were now six people. A nice little group of me, two french ladies two Italian ladies and one german guy. All were very nice and fun to be around.
At our first stop we signed a paper to remove responsibities from the company if you wanted to quit before it all was over. Now we also knew the name of the company. Panda tours.

So I read a few rewievs on the go and most were very negative. But most were also about another tour that included elephant riding and rafting.
We decided there and then that we would not be affected by the reviews. We would keep our spirits high whatever happened! And we did 🙂

The first day we were heading for the village of Papojom which was about three hours slow walk away, mostly up a steep mountain. We heard later that some people just gave up there and didn’t wanna continue… if they are taking a tour with hours of walking in mountain regions… what did they expect?

The first stop of the day was at a local market to get some water and snacks for the trip. It was honestly pretty confusing because we really didn’t know what was included with the tour. But we got some water and thai whiskey and off we went again. We arrived a bumpy hour later at our base camp where we had some Pad Thai for lunch. It was great. And then we started walking.

The guide we had, Simon (not his birth name from Burma) was very good and he knew everything about the jungle and the areas around these mountains. He was a real local with a great sense of humor and with many tricks up his sleeve. Considering that he had been doing these kind of treks for three years, he really kept a good face.

One of the first things he did was to ask us if we wanted to see a spider. I said yes instantly and he started to dig around a hole. The others were not so happy about it but intrigued nonetheless. He dug out a big tarantula, he even stuck his hand in the hole… he was clearly very comfortable doing this. When he got it out, he turned it on its back, grabbed it and cut of the fangs so it would not be dangerous anymore. Even though we knew it wasn’t dangerous it took some real mind power to touch it. He then put it in his bag and we continued onwards.

During the whole trek he was explaining things about fruit and animals and other stuff we asked him about. He found things everywhere he looked. All of a sudden he was holding a chameleon or a gecko or some fruit, some nuts or something he crafted on the way. He made toys with grass, bamboo, banana leaves and rocks. He was great. 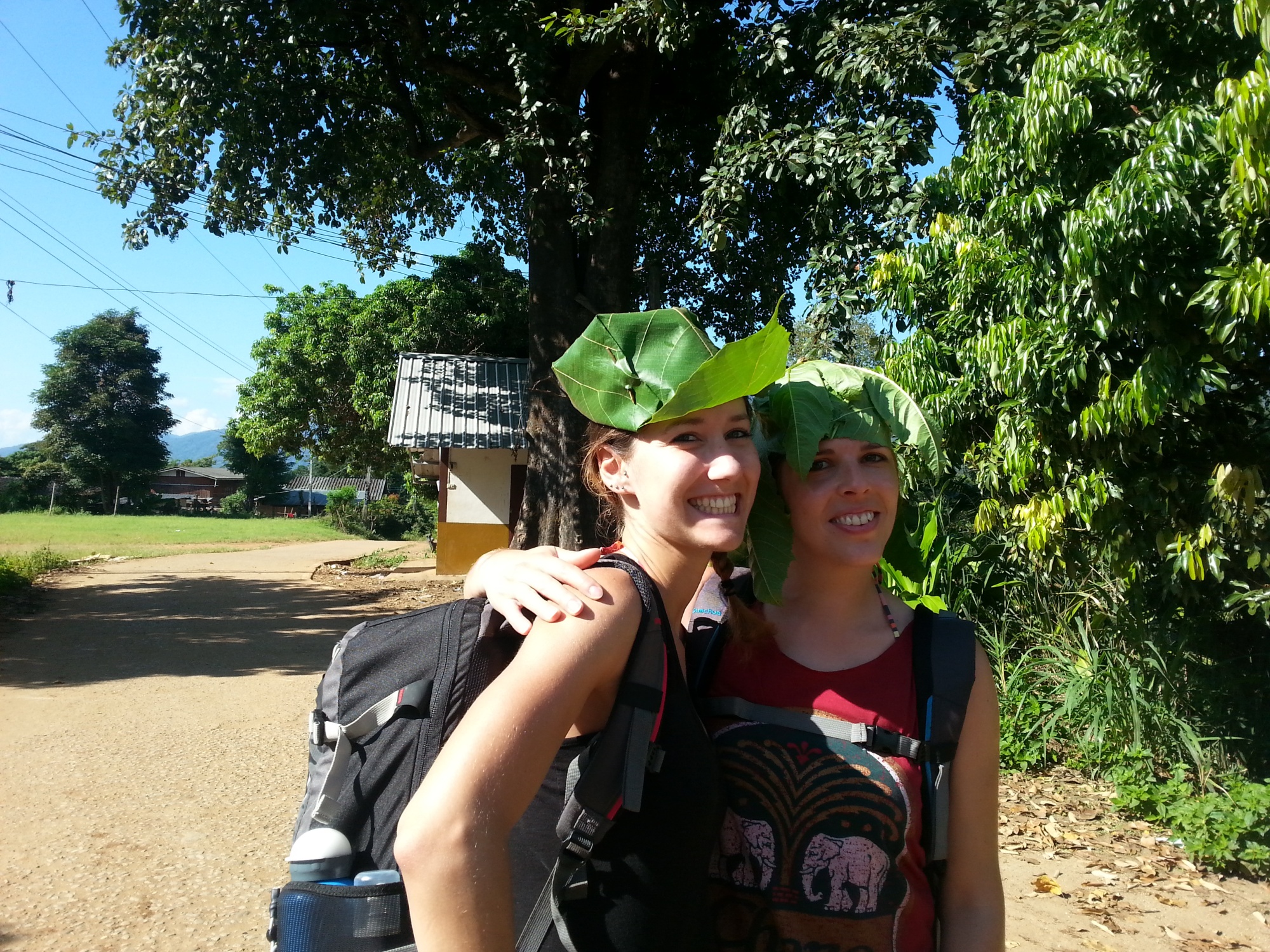 Halfway through we stopped at a bat cave and saw two bats. Beter than none I guess ;). And the trek wasn’t actually tough at all. We took it very slow and took breaks often. That way he could show us different things and talk a bit.

Well up in the village of Papojom located 1100m above sea level we settled down, got some cokes and beers. The place was beautiful but the accommodation was very sparse. I guess people complain about that. But I got more that I hoped for. There were toilets and showers (just a hose but that was fine) and we had mattresses in a bungalow. That is more than I have on my treks in Sweden. We didn’t get any mosquito nets though but there were actually very few of them so it was ok.

We then had dinner. It was very good with a big pot of chicken soup and a spicy vegetable mix with rice. Really good and tasty actually. Later that evening we had some beers and our guide played a flute, he knew quite a lot of melodies for only learning to play himself. It wasn’t the best performance ever but it sure was moody.

Me and my german friend we stayed up later than everyone else talking to the guide over some whiskey under the starry skies with the milky way above us. It was a very clear night, it was fantastic. I really like to get to know the guides and the locals a bit so I really enjoyed our time. I even learned that there are only 7000 stars! Some guy had counted them hundreds of times. Now you also know!

I could actually get some sleep. I was a bit amazed because the roosters started to scream around 03 in the morning… it is how it is and of course many people complained. But hey, we had a great breakfast with toast and scrambled eggs and tea or coffee.

The second day walk was a lot easier and with a lot more scenic routes. It was amazing and really beautiful. We just walked around farmlands, on top of ridges and on very scenic roads until we got to the village of Thuthka. There we had our lunch which also was great. Although the owners of the place where pretty unimpressed by us. I guess this is also something people complain about. But when you have had four groups of tourists at your place every day for years, I can imagine it being kind of boring or even annoying. These guys don’t make much money. Our guide for example was making 150 thai baht for one day. That is usually what we pay for food during one day. So I can understand their lack of enthusiasm.

So in all it was a great trek for me and my new friends. We really enjoyed ourselves! I can really recommend trekking around Chiang Mai!

I’m sorry for the really crappy quality of the videos, but I mostly make them on the go just to get a feel for the scenery or the situation. Sometimes they turn out fine and sometimes like crap. I upload them anyways 🙂